The double game, treachery and deception of Hindutva Brigade which is not very evident to the common man will be exposed as you go through this article.

The Hindutva brigade is inciting the “Bodo Sena” in Burma to commit genocide of Rohingyas on one hand and then when they are coming to India in desperation to save their lives the same people are raising FALSE alarm of national security. 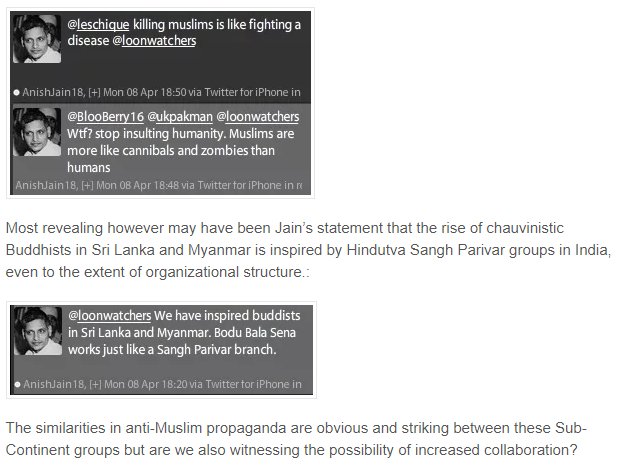 If that was not enough these cowards are now latching on to the statement of Burmese army (who has been committing genocide and denying every right to Rohingya Muslims) when just like all oppressors they blamed Rohingya as terrorists who are guilty of committing massacre of Hindus. Even a child wont believe such accusation of Burmese Army which has no credibility left in the international community, however the Hindutva brigade was quick to jump in support of this ridiculous claim as if on queue. Any attempt by international media to visit the site to verify their claims was blocked which makes it very clear that they have something to hide. This shows that Hindutva brigade can go to any lengths to feed their Islamophobic desires so much so that they are willing to sacrifice their own brethren for keeping this hate and phobia alive as is exemplified by their lack of criticism of Burmese army for massacre of Hindus there.

There has not been a single FIR against any of the 40,000 Rohingya refugees on any terror charges in India and most of those coming for refugee are women, children, old and weak. So the false alarm of national security threat raised by Hindutva is nothing but an attempt to hide their Islamophobia. When we have refugees from Tibet, Bangladesh, Sri Lanka and Pakistan who are not Muslims nobody seems to have a problem but Rohingyas being Muslim the Hypocrisy is for all to see. Not only that those supporting Rohingyas on humanitarian grounds have suddenly become traitors & anti-nationals. a Pathetic state of affairs indeed. 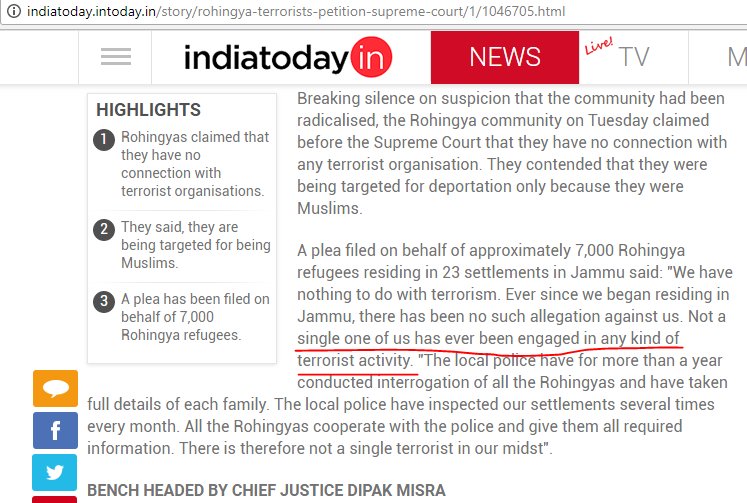 Bhakt Logic: If India is intolerant why ask refugee status for Rohingyas 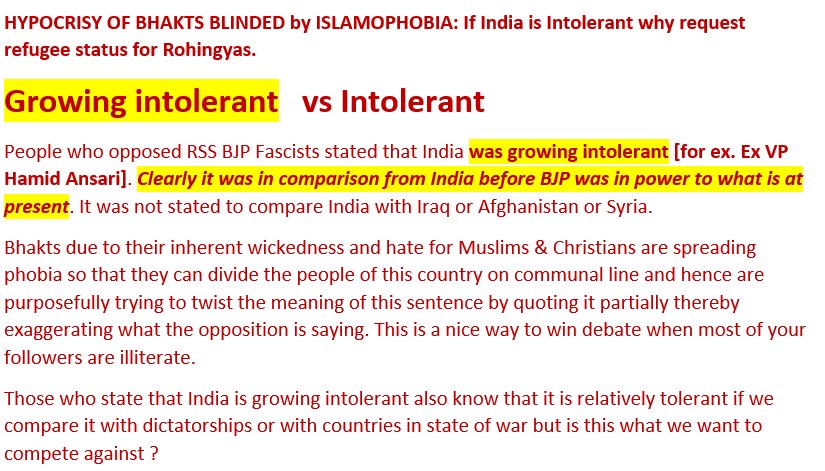 Bhakt Logic: Why Muslim countries don’t give refugee to Rohingyas

Bhakt Logic: Rohingyas are not Refugees but Illegal immigrants

In their aim to prevent refugee status to rohingyas hindutvadis have come up with the argument that these rohingyas did not come via proper travel documents and hence they are ILLEGAL IMMIGRANTS unlike the HINDU, TAMIL & TIBETAN refugees to whom India has given asylum.

Fact of the matter is that Rohingyas ran from their home country to save their lives from immediate & serious threat hence it is irresponsible and inhumane to expect travel documents from them. Generally those who came via proper channels with proper documents are those who either don’t deserve OR are less deserving of refugee status than those who had no option but to run leaving back all their property and belongings often even at the cost of their near and dear ones.

India has given refugee status to Hindus from Pakistan whereas there is no genocide of Hindus there, they have voting rights & are free to work in government or the army whereas rohingyas have been denied their voting rights and they are living as second class citizens in Bangladesh. The plight of Hindus in Pakistan & Afghanistan is by far way better than rohingya Muslims of Burma / Myanmar. So the excuse of travel documents doesn’t hold especially if we go to the globally accepted definition of refugees:

Who is a refugee?

A refugee is someone who has been forced to flee his or her country because of persecution, war, or violence. A refugee has a well-founded fear of persecution for reasons of race, religion, nationality, political opinion or membership in a particular social group. Most likely, they cannot return home or are afraid to do so. War and ethnic, tribal and religious violence are leading causes of refugees fleeing their countries.  [source: UNHCR]

According to the United Nations Convention relating to the Status of Refugees [PDF], as amended by its 1967 Protocol (the Refugee Convention), a refugee is a person who is:

Refugees are a special class of migrants who under international law deserve specific protection by their host state. According to Article 1 of the 1951 UN Convention, as modified by the 1967 Protocol, a refugee is defined as a person who ‘owing to well-founded fear of being persecuted for reasons of race, religion, nationality, membership of a particular social group or political opinion, is outside the country of his nationality and is unable or, owing to such fear, is unwilling to avail himself of the protection of that country.’ This definition implies that several qualifying conditions apply to be considered a refugee: (1) presence outside home country; (2) well-founded fear of persecution (being at risk of harm is insufficient reason in the absence of discriminatory persecution); (3) incapacity to enjoy the protection of one’s own state from the persecution feared. The definition of refugees was actually intended to exclude internally displaced persons, economic migrants, victims of natural disasters, and persons fleeing violent conflict but not subject to discrimination amounting to persecution.

A refugee is not the same as an asylum-seeker. According to the United Nations High Commissioner for Refugees (UNHCR) ‘an asylum-seeker is someone who says he or she is a refugee, but whose claim has not yet been definitively evaluated’. In the case of mass refugee movements (usually a result of conflict), the reasons for fleeing are evident and there is no capacity to conduct individual interviews, such groups are often declared prima facie refugees.

Note: RSS has a branch in Burma to promote  its wicked  ideology, it is known as Sanatan Dharma Swayamsevak Sangh (SDSS).  This organization has developed close relations & rapport with military dictators in Myanmar  who have propped up  characters like Ashin Wirathu to propagate hatred for Muslims in the country.