The world today maybe progressing in science and technology however we are digressing in terms of civilization, ethics and moral values day by day so much so that people are now increasingly crossing the line on matter of respecting other religions, castes, communities, nations, societies, race, culture etc. which was earlier considered a RED line which no one dared to cross.

Minority communities in general and Islam and Muslims in particular have been exposed to increasingly harsh, venomous, vicious and insulting attacks against their religion from right wing hatemongers like zionists and hindutva brigade under various pretexts, aim of which is to create a sense of phobia & hate by alienating people against each other to meet narrow political ends. Those Islamophobes who are stupid voice their open enmity with crass statements whereas those who are bit sophisticated take help of sarcasm & pass the message in a more subtle way. Those who make these shameful and brazen statements against Muslims dare to do so because they know that they can get away with it due to prevalent political climate where Muslims lack leadership or political capital and are economically and politically marginalized & lagging behind in all social and economic indicators. There have been some tried and tested formula which has been used n number of times in the past and is being repeated at present which need to be exposed and we would like to do the same through this article:

Some of the tricks used successfully create Islamophobia in India in particular and world in general are as below:

If you go through the pattern then it is similar to one used long back against Jews which left unchallenged ultimately resulted in holocaust. As is beautifully explained in the following article:

“In the end, hate not only destroys itself, it also destroys everyone in its path. Remember how fascism destroyed a great country like Germany and a civilisation like Europe even though the Jews were its intended targets.”           [Aijaz Zaka Syed, Padmavati and imagined angst]

Apart from the above mentioned strategies of Islamophobes there is the problem with fence sitters who have suddenly started having problems with everything related to Islamic religion be it the concept of God Almighty, the concept of heaven and hell, the concept of Hoors (in Jannah) and so on. However these people having double standards when they criticize Islam or Muslims forget what is mentioned in their own religious scriptures. As we know the concept of heaven (and hoors) in Islam has been favorite subject of ridicule by many, we will prove that similar concepts are there in all religious scripture and hence the selective criticism of muslims is nothing but sheer hypocrisy.

Concept of heaven & hell in Christianity

Who will go to Hell as per BIBLE [https://bible.org/article/what-bible-says-about-hell]

Torment in Hell as described in Bible [eternal and irreversible]:

Torment in Hell as described in Hindu / Budhist / Jain Scriptures:

Naraka (Sanskrit: नरक) is the Hindu equivalent of Hell, where sinners are tormented after death.[1] It is also the abode of Yama, the god of Death. It is described as located in the south of the universe and beneath the earth……The stay in Svarga or Naraka is generally described as temporary. After the quantum of punishment is over, the souls are reborn as lower or higher beings as per their merits.[1] In a few texts, hell is described as a bottomless pit of darkness where souls are trapped for eternity and deprived of rebirth.

To sum up this picture about hell gives general idea about various types of punishment meted out to the dwellers of hell: 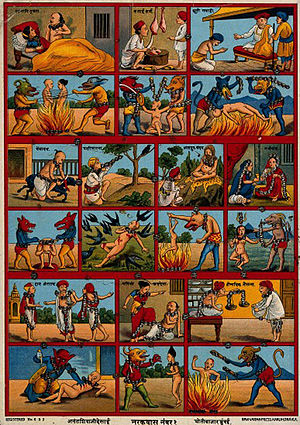 An apsara, also spelled as apsaras by the Oxford Dictionary (respective plurals apsaras and apsarases), is a female spirit of the clouds and waters in Hindu and Buddhist culture. [source: wiki]

Urvashi (Sanskrit: उर्वशी, lit. she who can control heart of others. (“Ur” means heart and “vash” means to control) is an Apsara (nymph) in Hindu legend. Once the revered sages Nara-narayana was meditating in the holy shrine of Badrinath Temple situated in the Himalayas. Indra, the king of the Gods, did not want the sage to acquire divine powers through meditation and sent two apsaras to distract him. The sage struck his thigh and created a woman so beautiful that Indra’s apsaras were left matchless. This was Urvashi, named from ur, the Sanskrit word for thigh. After his meditation was complete the sage gifted Urvashi to Indra, and she occupied the pride of place in Indra’s court.

Rambha in Hindu mythology is the Queen of the Apsaras, the magical and beautiful female beings in Devaloka.